"And so it came to pass that in a last bid to cheat Death itself, Thanos the Necromancer, poured his knowledge and power into the, Annulum de Immortuos, the Ring of Undeath. But in those last minutes, the Servants of Arawn, breached his sanctum and captured the wayward wizard for their master, but not before Thanos used the last of his power to send the ring away to safety. With their prize in hand, the Servants of Arawn, dragged Thanos screaming into the Underworld."

The Ring of Undeath, also called The Black Ring of Thanos, is an artifact. It should not be found by random chance, but placed carefully and deliberately into a campaign. Arawn, the Lord of Death himself, will seek after anyone known to possess the ring, sending his Servants to secure the ring and to capture those who would dare attempt to cheat him. 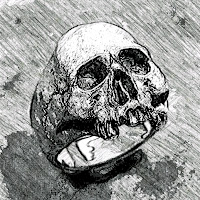 How the ring may be destroyed is entirely up to the DM. Destruction of the ring will stop Arawn from taking vengeance upon the wearer and their companions.

Posted by Gerald Williams at 10:59 AM