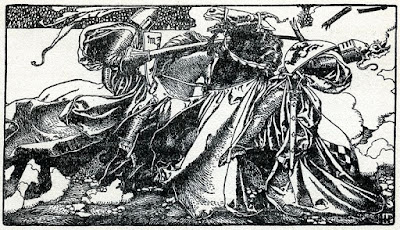 This article only covers tournament jousting, not combat jousting. General tournament rules will follow in a later article. These optional rules were written for Swords & Wizardry, using the single saving throw rules.

In a tournament joust, the normal rules for initiative are not used. Instead, both parties are considered attacking at the same time. One normal attack roll is made by each rider during a pass. These attack rolls may be modified by any Strength modifier "to-hit" bonuses. Armor class is NOT modified by Dexterity.

Any modified roll of 11 or better counts as a touch, for 1 Point. The lance does not shatter.

Any modified roll that hits the opponent proper (die roll hits AC 2 [17]), the lance does 2d6 (plus Strength modifier) non-lethal damage, and shatters, counting as 2 Points. Any attack roll that unhorses an opponent shatters the lance, but only counts as 4 Points, not 6.

Any roll of natural 1 unintentionally hits the opponent's horse, usually resulting in paying a monetary penalty to the opponent, and possible disqualification if deemed intentional.

Any roll of natural 20 automatically unhorses the target, no Saving Throw is used.

Riders that are properly hit must roll a Saving Throw, with failure resulting in being unhorsed. Falling from a mount does 1d6 non-lethal damage.

Four passes (tilts) will be made, or until one or both riders are unhorsed, whichever is first. It is possible to tie during advancement, but the final challenge to determine champion must be settled.

Disqualifications occur for the following:

Tournament rules are in place for the safety of participants. The games are a matter of honor and skill, with the risk of severe injury and death reduced when possible. Participants that intentionally cheat, reduce the status of the tournament and cheapen the affair.

Participants must wear plate mail, helmet, and shield. They must also use a warhorse. These rules ensure that only properly trained mounts are used, and the participants are protected.. with the unspoken understanding that the cost of such equipment also keeps "the rabble" out of competing.

The DM may create additional rules or change rules as they wish, but MUST announce the rules at the start of the tournament.

Posted by Gerald Williams at 4:41 AM No comments: Links to this post

Sometimes, even the best of us, has a brain fart. We're going along without interruption and suddenly.. WHAM.. mental block. It doesn't even have to be a big blockage, just something simple, like needing to figure out the name of an NPC or a town. There are extensive lists and tables filled with names of such persons, places, and things, but sometimes all you really need is a first letter, or first few letters, to help jump start you along. That's where the, D30 Letter DieTable, comes in handy. 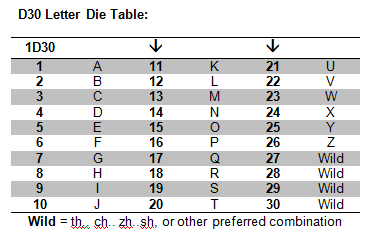 The above table is based on the two specialty alphabet d30's, from Koplow Dice. These are the two we have on our personal game table. We are making this table available here in case you don't have access to one of these specialty dice. Feel free to personalize and substitute your own preferred letter combinations for any Wild results rolled.

Use any method you want to roll names. You can roll the first letter, first and last letter, or any other combination. The reason I like to use the letter dice is because it forces me to break out of my normal mindset. I tend to favor some letters over others, when picking "random" names, which causes a lot of headaches when most names in my campaign begin to look and sound similar.

Posted by Gerald Williams at 2:44 PM No comments: Links to this post

The following two tables are part of a DM Screen that we're making for our home campaign. They use the Base Attack Bonus (with Ascending Armor Class), and Single Saving Throw, rules options from Swords & Wizardry Complete.

If you so desire, just click on the pictures to see them at full size, and save to your device for your convenience. 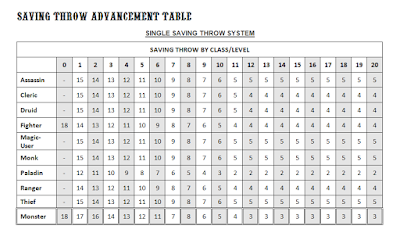 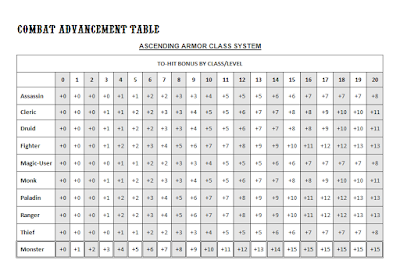 Posted by Gerald Williams at 3:07 PM No comments: Links to this post