Earlier this week, the staff here at Portcullis was throwing back a few beverages and bantering back and forth about unusual applications of 1st edition (AD&D) spells. One of these topics was the off-brand use of the spell, Purify Food and Drink. By off-brand use, we mean the use of a spell in a way that it may not have been originally designed, but for which a reasonable case could be made. In this case using, Purify Food and Drink, to drive out parasites from objects, though not living beings*. 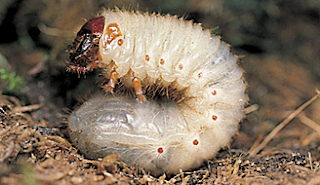 An original use of Purify Water (Food and Drink) to destroy a monster can be found under the description of the Water Weird. This brought forth suggestion that applications of the spell might also be used to cleanse doors, and other non-living objects, of other such nasty creatures as Ear Seekers, or Rot Grubs.

Of course, it was then suggested that reversing the spell to Putrefy, could potentially be used to infest objects and doors with such creatures, but the general consensus agreed that was generally beyond the scope of a first-level spell.. Though one particularly evil DM decided that they'd allow it on a roll of 25% or less.

* - Rules for removing these horrors once they have infested a host victim have already been specified, so they do not apply to this discussion.
Posted by Gerald Williams at 11:32 AM No comments: Links to this post