Looking To The Public Domain For Game Artwork

Artwork draws the eyes, draw the eyes and you draw the attention. Artwork is a necessity for any visual medium, especially blogs and gaming content. If you want your work to catch and hold the reader's attention, you need to add visuals, even if they are only moderately related to the content.

But original artwork costs $money$ and very few of us have extra money available. Stealing artwork is out of the question. One should always give credit and attribution to artwork made available for public use by creators.


The Public Domain offers an enormous amount of freely available artwork for the cash strapped writer, or gaming creative team. But give care to where you get your artwork from. Though it may be in the Public Domain, some artwork has been altered, or modified, by many websites, and copyright issues can become a problem if you misappropriate their work. Always check your sources thoroughly.


Here is a list of artists in the Public Domain. It is by no means exhaustive, but should provide an excellent selection of various styles to choose from.

The Historical Maps of John Speed

John Speed is probably one of England's most celebrated map illustrators. His maps are amongst the most sought after by collectors. And fortunately for the gaming community, these beautiful maps also quite useful for adventure campaigns. 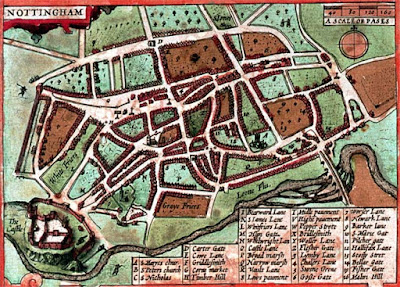 The digitized maps of John Speed available here.
Posted by Gerald Williams at 1:15 AM No comments:

Now days there are specialty dice with more and fewer sides, manufactured for various games. But the classic five are still the basis upon which most game systems stand. These other dice, often referred to as novelty dice, aren't really needed because the numbers they generate can easily  be duplicated using the five basic shapes. In our home campaign, we prefer to keep our tables and other materials limited to the basic platonic solids. Though we do include the ten-sider and "percentage" dice for further convenience.

Personally, I admit to being an old Grognard. I'm set in my ways and slow to change, unless given a really good reason to do so (including, but not limited to, being lazy, cheap, or convenience).

Posted by Gerald Williams at 10:05 AM No comments:

D6 was released free to the public. Some content is still under license and not free. 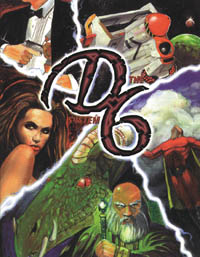 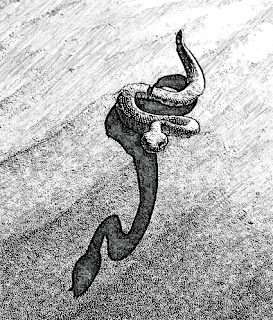 
Shadow Strikers, are a strange aberration of necromantic and phantasmal energies, that have been around for untold ages. In their natural form, they appear to be living snake shaped shadows.


They live within the shadows of the natural world, flitting from one shadowed area to another, always staying out of fully lit areas whenever possible. If they must venture into an area without shadow, they will form an illusionary snake form to slither under, acting as its shadow. If this illusionary form is dispelled, either by dispel magic, or having Light cast upon it, the Shadow Striker will flee to the nearest substantial source of shadow, to take refuge. Shadow Strikers are completely invisible in shadows and make no noise.


Strikers are immune to the effects of Sleep, and normal weapons. They are affected by Snake Charm.


A Shadow Striker attacks by "biting" its victim, forcing a Save vs Paralyzation or the target collapses for the duration of the attack, becoming incapable of any voluntary motor functions. The Striker then drains one point of Constitution per round, up to the total hit points the Striker has when at full health. Should the victim is drained to a Constitution of 0, they must make a System Shock roll or die. A successful System Shock roll means they lapse into a coma for 2-7 (1d6+1) hours, after which they regain consciousness with full Constitution. 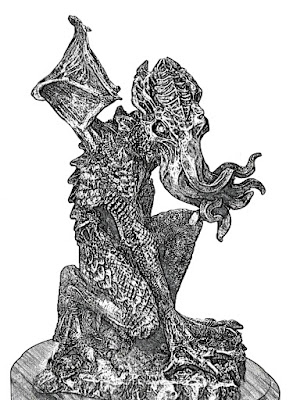 The Axxor are foot soldiers of an ancient and terrible race that serve the Dark Ones. Often they are sent out to kidnap important victims, or to bring back "food" for those they tirelessly serve. Otherwise they will be guarding the lairs of their masters without question or deviation, never needing to check Morale within their dark tunnels.

In combat, if an Axxor hits a target with both claw attacks, then the victim is drawn in and immediately attacked by four tentacles. These tentacles need only make a melee touch attack against the target to latch on. Each tentacle then automatically does 2 points of damage per round, taking eight rounds (-1 round per tentacle attached) to suck the brain from the victim, killing it. Victims losing all hit points are considered sucked and dead. Should the victim be rescued, or break free of the grapple, the process needs to be started all over again. Victims of  Enfeeble Mind will not be able to struggle to free themselves.

Axxor can perform the following abilities at will; Fly (as per the spell - unlimited duration), Darkness 15' Radius (the Axxor sees through this darkness), Summon one other Axxor (10% chance per round), Enfeeble Mind (as per the Feeble Mind spell, works on all victims, turning them into drooling vegetables, -4 Saving Throw).

These horrid beasts are immune to Poison, Acid, Sleep, Charm, and Blindness spells and affects.

Axxor may guard treasure, but will never possess any of their own. They do not use weapons, magic items, or anything else whether for attack or defense.


The graphic of the Axxor is based upon a statuette of Cthulhu, available on-line as, Cthulhu Rising".
Posted by Gerald Williams at 6:44 PM No comments:

In the earliest days of the hobby, having high attribute scores offered very little in the way of bonuses to character performance. Also, there was no system¹ for the growth of a character's attributes, though there were plenty of ways to have various attributes lowered.

At most, a character would enjoy a +1 bonus for having a score of 15 or better in a characteristic. These ranges and bonuses were later expanded upon, and only in later editions of the original game were rules put into place to allow characters to increase attribute scores as they progressed in levels.

Character generation also had a fair chance of creating characters with dreadful drawbacks, such as crippling low strength, intelligence, health, etc. It is true that some players can, and do, enjoy role-playing the hell out of such characters, for the most part such "hopeless" characters were scrapped and new characters had to be re-rolled, wasting everyone's time.

The following rules, written for my home campaign, allow character generation of solid, playable characters, and allow room for growth as they progress in level. These rules also go hand-in-hand with the optional rules for using attribute scores as percentages to  determine if a character's actions are performed successfully or not. (See this article here.)

As always, these rules are guidelines and may be adjusted as you, the DM, see fit for your own campaign. This system is intended for Player Characters only, not NPCs.

Instead of standard rules of using 3d6, characters are generated by rolling 2d4 and adding 7 to the total. Starting attribute scores will range from 9 to 15, with average starting scores ranging from 11 to 13.

Players may add +1 to any one attribute of their choice upon attaining levels 3, 6, and 9. If the DM wishes, an additional +1 may be added to a character's prime attribute only for every three levels beyond 9th. If a character possesses more than one prime attribute, it is up to the DM to decide which may be raised.

Optional: Spell-casters are limited in the level of spells they may access directly related their prime attribute score. A character may only cast spells of a level for each point their prime attribute is over 10. If a magic-user only has an Intelligence of 11, then they are limited to first level spells. If they have an Intelligence of 14, then they are limited to a maximum of fourth level spells. This system is meant to be used in conjunction with the optional multi-classing rules which will be covered in a future article, so be sure to subscribe to this blog for that upcoming update.

¹ - Magic tomes found in random treasure tables, or the occasional odd magical statue or fountain, do not count as a system!
Posted by Gerald Williams at 5:56 PM No comments:

DragonQuest is a fun little tabletop RPG from 1980. It went through two editions before being acquired by TSR and a third edition published in 1989. The game has since been abandoned By Wizards of the Coast, though there is a thriving on-line community of die-hard fans.

Files for the game system have been published on-line with permission by WotC. 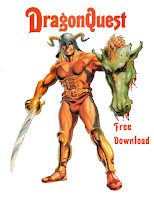 DragonQuest does not use character classes, but instead uses a system of professions with skills. It is NOT a clone of Dungeons & Dragons by any means. First and second edition are both the same, though cleaned up and clarified in the later. 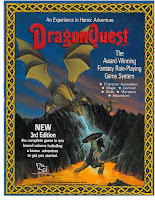 Third edition was put out by TSR when they took over the property. No real differences from 2nd edition, except some spells and colleges of magic were removed to avoid the, "Satanic Panic", of the 80's. 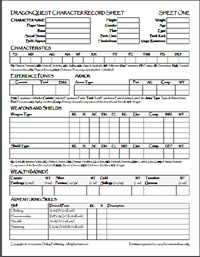 A very well-done character sheet. A necessity for keeping track of the many details found in the DragonQuest rules system.

There is still a large, active, community of DragonQuest players online, with many links to fan-made materials. http://www.dragonquest.org/

Posted by Gerald Williams at 12:20 AM No comments: