Recently, in our home campaign, characters have been using more barter exchange than coin exchange. The trade of goods and services have become more prevalent, and so the necessity of establishing relative "values". Especially for items that aren't normally represented in the provided "equipment lists", found in various game systems. 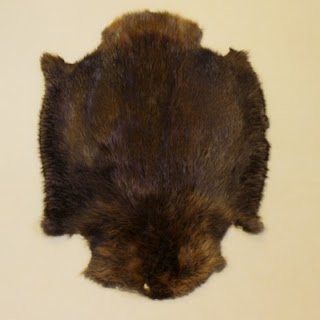 This installment involves fur trading. The following Fur Value table below is based upon the value of the beaver skin, which was the standard of the fur trade. A "Made Beaver" (MB), was the prime quality skin from an adult beaver weighing about 50 - 60 pounds. Some beavers can weigh as much as 110 pounds. All values are based upon how many of a particular item equals 1 MB. For example, it takes three Marten skins, two otters, or one pound of Castoreum, to equal the value of one "Made Beaver".

For ease of conversion into various game systems, 1 MB is equal to the value of one standard long sword.