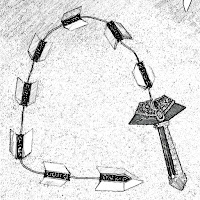 Whip Sword - Tail of the Dragon

This longsword, acts as a normal +2 magical weapon of its type, but once activated becomes a bladed whip that stretches twice its length. When in whip-form, the wielder threatens all adjacent hexes around them, allowing them to defend an area 15 feet across, not just the normal. In whip-form, the wielder can attack opponents using reach weapons, such as halberds, as though they themselves also possess a reach weapon.

Unfortunately, because of the sweeping, twisting motions needed to use the sword in whip-form, it can not be used with friendly combatant standing close to the user, nor in tight spaces.

In whip-form, the Tail of the Dragon does 1d8 +2 damage, and it adds +2d6 when attempting disarming, and tripping attempts. (See Swords & Wizardry; unarmed combat.) 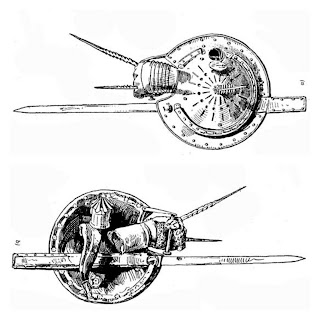 The original lantern shields were created for use during duels fought at night, and early dawn. The light from the concealed lanterns could be un-shuttered, and used to temporarily blind opponents, giving the attacker the advantage.

This magical variant, uses a Continual Light spell for the same effect, while posing less danger to the user than an oil fueled lamp. The aperture can be completely closed to fully conceal the light within, or adjusted from a crack to fully open to control the amount of light is revealed. Fully open, the lantern will cast a beam of light out to about 30 feet.

If used in combat during darkened conditions, the light can be shown into an opponent's eyes, whereupon they must Save or be dazzled for 1-3 rounds. Dazzled opponents roll all attacks twice, taking the worse roll as the result. This lasts until they are no longer dazzled. Using the lantern in this way uses one of the user's attack actions. Attackers attacking the dazzled target roll all attacks twice, taking the better roll as their result. This also lasts until the target is no longer dazzled.

The Lantern Shield attacks and does damage as a +1 short sword, and acts as a +1 small shield. The short sword blade can be extended or retracted back into the shield, easily. Lantern Shields are considered dubiously legal at best, by authorities.
Posted by Gerald Williams at 7:14 PM