A few years ago, I came across a set of four PDF files, the Classic Dungeon Designer's Netbooks, written by B. Scot "Kellri" Hoover. They were written for use with 1st edition Advanced Dungeons & Dragons, but are also largely compatible with any OSR rules based on that system. 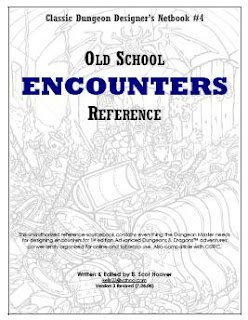 #1 Monster Stat Block Reference is a compilation of stat blocks for monsters appearing in the game. They make finding essential combat information easier to reference without having to pull out all the Monster Manuals and Fiend Folio. Very handy.

#2 Spells Reference is a comprehensive list of all magic-user, illusionist, cleric, and druid spells published for AD&D, and includes notes and commentaries.

#3 Geomorphs provides a set of 60 basic geomorphs to help give the DM a quick way to map an unexpected cave, cavern system, collapsed ruin, or dungeon, that the players might find. Simple and easy to use.

#4 Encounters Reference is the crown jewel of the set. The book is so full of useful information, that a quick description wouldn't do it justice. It talks about, and expands upon, everything the Dungeon Master may need when creating encounters..

Classic Dungeon Designer's Netbooks: (Good as of Aug 17,2017)
While you're at it, check out Kellri's blog, All Killer - No Filler. He has a lot of excellent material and more downloadable goodies than you can shake a Wand of Wonder at.
Posted by Gerald Williams at 9:22 AM