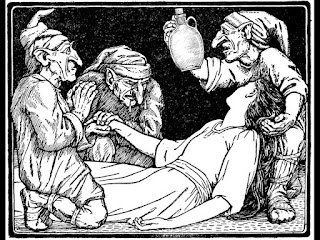 Imbibing this potion allows the user to change the color of their entire body, and all carried equipment, as well as one additional individual of equal size as long as they are touching. The character may change color at will for entertainment purposes, but the potion is meant to allow the character to naturally blend into their environment.

This effect allows the user to blend into the background, giving them a +20% to Hide in Shadows if they remain perfectly still, or +10% if they move slowly. Normal walking movement will reveal their location. If the user manages to get out of sight again, they will regain their bonus.

This potion only works for horses! When given to a mount, the animal can then travel at full top speed for a duration of twenty four hours. The animal needs no rest, nor food and drink, during this period. Only one such potion can be used during a week (7 day period), or the animal must make a Save or die at the end of the second potion's duration.

The entire potion must be drunk to take effect.


The Ale of Heracles

Drinking this potion allows the character to perform eight hours of physical labor in one hour. It also has the effect of improving the character's armor class by one, increases bare-handed damage up to the next die size, and improves unarmed attack rolls by +2d6 (see unarmed combat, Swords & Wizardry) . No more than three such potions can be drunk within 24 hours, or the character must Save or receive 6d6 points of damage.

The Draught of Narcos

Once consumed, the drinker will fall into a deep sleep for up to 7 days. During this time, it is nearly impossible to determine if the character is alive or dead. The character may set a time limit, and or a specific condition, that will wake them up before the full seven days have elapsed. If the character has been poisoned, or is losing hit points, these conditions will be halted until the character once again awakens.

The entire potion must be drunk to take effect.

The drinker becomes immune to any illusion spells, or illusionary spell-like abilities, for one hour. The character will clearly know that illusionary images, sounds, etc, are not real and cannot be fooled nor harmed by them. Note that not all Illusionist spells are actually "illusions".

The Dram of Nai Kavon (Hair of the Dog)

This potion will allow a character to prevent themselves from contracting Lycanthropy or Vampirism. If the character survives being bitten, they must drink the entire potion, mixed with either some hair or blood of the creature that inflicted the wound upon them. From then on, that character can never be infected from the attacks of that specific creature ever again.. Though they can still be wounded and killed.


Download all the potions from A Pocket Full of Potions I and II in PDF.
Posted by Gerald Williams at 1:51 AM