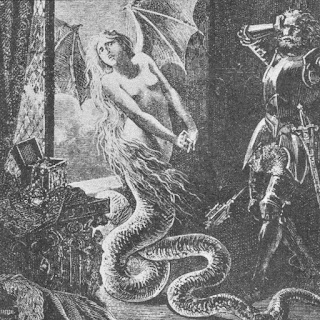 A Melusine is a very rare creature. A member of the Fey, they rarely are seen in the lands of men, but do occasionally seek out sacred sites to partake in religious rites, or bathe in druidic groves to renew their powers.

Whenever they are in the Lands of Men, they appear to be human women of exquisite beauty, and charm. Tales speak of mortals falling in love with them and marrying them, unknowing of their magical nature. Rarely do these tales have happy endings. In order for a Melusine to agree to marry a mortal, they must extract a sacred oath from their lover. Should their lover ever break that oath, the Melusine's supernatural form will be revealed, and terrible consequences will befall the offending mortal.  If a mortal sees them in their Fey form, usually while they bathe, give birth, or perform sacred rituals in the forests, they will become very vengeful and punish the offending mortal.

In both human and Fey form, a Melusine possesses the powers of a 6th level cleric, and a 5th level magic-user. They do not require material components, or time to prepare or memorize their spells, however they are limited in the number of spells they may cast per day, determined by their class levels.

In Fey form, they appear as their human selves, though with a serpent's tail from the waist down, and sport bat wings with which they may use to fly. They possess enormous strength, and can break stone with their fists.

One tale even tells of a Melusine of great power that could take the form of a dragon.

Posted by Gerald Williams at 5:14 AM