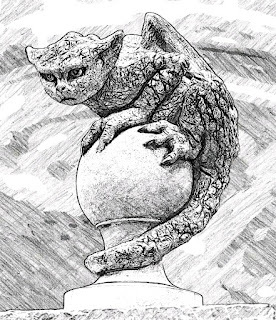 Mogli (both singular and plural), have a very limited invisibility. They may only become invisible for a second or two, but not when being directly observed. The moment they are out of everyone's line-of-sight, they can become invisible for a short moment or two, just long enough to move to a different position before becoming visible again. While invisible, they may move freely in the line-of-sight of others, without revealing themselves. The normal rules for Invisibility do apply, so they may not attack and remain invisible.

When fighting defensively, or trying to fend off a minor annoyance, a Mogli will use its bite. They only fly into a Frenzy when grappled, or cornered. Being very intelligent animals, they will try breaking an attacker's line-of-sight to then use their invisibility to gain an advantage, or to escape. They do not have true flight, but can run along and use their wings to make great leaps and bounds of up to 9 feet or more, but they must have at least 10 feet of clearance to do so.

Unusually intelligent, Mogli can understand the languages of men, or other races they live in close proximity too. Totally self-absorbed, they will ignore anything said to them, unless it has to do with food, or praise, otherwise they couldn't care less and ignore everything unless it serves their self interest. Though they do not speak in any known language, they are able to communicate basic ideas, like feed me, scratch my belly, get out of my spot, etc. Sometimes when talked to, the speaker will reply to themselves using a different voice, interpreting the meaning of the Mogli's expressions and odd  mewling sounds.


Though reptilian, their skin is soothingly soft. Intelligent beings are often lulled into stroking a Mogli while it rests in their laps. The creature will give a little nip to indicate that it's had enough petting and scritches. It is not unusual for a Mogli to adopt an intelligent being to serve it. Such creatures will often give the Mogli small trinkets and treasures, most of which will be ignored in favor of whatever packaging they came in. Unless they make noise, in which case the Mogli will play with it endlessly while its servant sleeps.


On rare occasions, a Mogli will serve as a spellcaster's familiar.