The PCs come across a fully equipped, riderless horse on the side of the road. The animal will attempt to get the players to follow it. If they do, they will be lead back to an old well, with a broken side wall.

Inside the well is the rider. He stopped to get a drink, the retaining wall broke, and he fell into the well. That was a few days ago, and the nights have been particularly cold. His hands are frostbitten, as are his submerged feet. A character will need to climb down the well on a DC check of 13 to avoid dislodging rocks down onto the trapped man, otherwise the falling rocks will easily kill him. Sir Edmont is in a greatly weakened state and virtually helpless when the PCs find him.

Sir Edmont, will reward the players with his horse and armor for rescuing him. If they can heal him, and save his fingers and toes (Medical DC of 13, and or use appropriate spells) then he will reward them with a further prize of several hundred gold pieces.

If the PCs murder, or accidentally kill, Sir Edmont, they will easily be identified by the horse and equipment if they show up with either. Returning his body for burial will net a reward of several hundred gold pieces from his family.

Posted by Gerald Williams at 12:18 PM No comments: 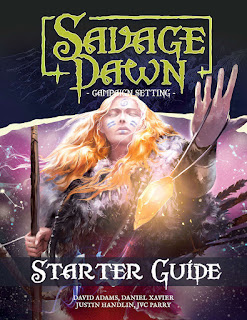 The following is written for use in whatever game system, or edition there of, you prefer. 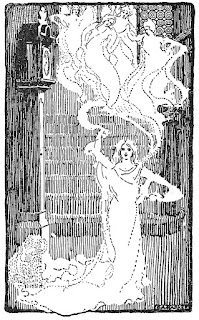 Arteman walked to the stone sarcophagus carefully, watching for the slightest signs of a trap or trigger spell. The Jarls of old were known to jealously protect their burial hoards with both physical and magical wards.

Jorda Singh chuckled. "You approach the dead as timidly as a virgin, their master." The dark skinned Turanian's bearded face split wide with a feral smile.

The younger elf just smiled and shook his head. "You wish I approached you as cautiously, my Lion." His face grew serious. "These northern chieftains were as jealous as dragons with their gold. Even hundreds of years after their deaths, they can be just as deadly too."

"Old wives'tales and superstitions," spat Voramir. The tiefling warlock sneered, "These filthy barbarians, and their weakling gods, pose no threat to a true son of the Nether Realms.

Both the human fighter and elf thief just glared at the arrogant half-blood and shook their heads. They knew better than to dismiss the northern born so out of hand. They might be savages, but there was nothing weak about these people.


The young elf inspected the stone encasement carefully, making note of the occasional hole drilled here and there, and of the futhark runes carved along the top. His understanding of the language was limited, but it seemed to pertain to both a burial and a marriage contract. He just shook his head, not making any sense of the context of what he was seeing. Careful investigation of the holes showed no signs of traps. After a nod of his head, Jorda slipped up beside him, and together they prepared to slide the heavy stone lid aside.

Almost instantly, a light bluish fog began to pour out of the holes, swirling and coalescing into the ghostly face and torso of a northern woman. He eyes blazed as she cupped Arteman's face and drew him irresistibly to her lips and kissed him. Jorda, watched in horror as his lover began to turn blue and frosted with ice.

"You witch! I shall send you to the Hell of Burning Sands!" The human drew his heavy tulwar from its scabbard as quick as thought, and slashed the blade harmlessly through the ghostly image.

The tiefling warlock stepped back in surprise, but rallied himself. "Spirit of death and ice, you shall not survive the setting of the sun this day!" His hands began an intricate arcane dance as ancient words of power spilled from his lips...

The ancient North Men were a people of traditions and magics long before the coming of the foreigners. Their's is the legacy of legendary heroic battles and great treasures won from the clutches of ferocious beasts and malignant spellcasters.

The treasures of old were often jealously guarded by protective spells, curses, and terrifying monsters.This article is about one such guardian, the Cold Bride. Some men are consumed with greed and jealousy in life, and so some are in death as well. The Cold Bride is the result of a terrible curse, a ritual marriage performed upon the burial of a powerful chieftain. A young woman is taken, her throat slit, and her body buried with the corpse of her "husband". Her restless spirit is then condemned for eternity to guard his burial site and treasures.

Most games have mechanics for the undead, specifically vampires. The Cold Bride is a variation of vampire in my home campaign, with only a few differences.  She may change herself into the form of mist, a small woodland creature, or a bird no larger than a raven. She is not effected by a crucifix, or sunlight, but does stay back from open flames and can be destroyed by fire. Depending on the campaign and rules system used, there can be lesser and greater versions of the Cold Bride, with the greater versions being able to turn hapless victims into lesser undead guardians.

Cold Brides do not roam the countryside and feed like regular vampires, they do not need to feed at all to remain strong. They will remain close to the burial site, only venturing out, even in full daylight, to scout for approaching intruders. As Game Master, you can have them do as you like, but in my campaign they usually don't do anything outside of the burial site to draw attention, giving no warning or sign that anything is amiss.
Posted by Gerald Williams at 7:39 AM No comments:

Joined By Gaming, is a pretty cool charity effort from the soon-to-be husband and wife team of Tori Trombley and Aaron Cordiale. These two use the power of games to help promote charities and causes that are important to them, and to help bring people together in the spirit of cooperation and entertainment.. thus "joined by gaming".

Recently, in November, Tori and Aaron, locally coordinated and participated in a 24 hour gaming marathon, Extra Life, to raise monies and donations for the Children's Miracle Network. Their efforts were rewarded beyond their expectations as they more than doubled their stated goal.

We here at Portcullis first became aware of these kindhearted people when I started becoming a regular at the Freakopolis Geekery, in Whitehall, NY. Both of them are players in the, Lands of Alaire Campaign, actual play series on Twitch and YouTube.

The Lands of Alaire

I've taken the last few months off from writing, spending less time running games, and more time actually playing. This doesn't happen that often, so I've taken advantage of the opportunity while it presents itself. I joined an in-shop, 5th Edition game, The Lands of Alaire, being run at Freakopolis Geekery, in Whitehall, NY. The DM, Ian Rollins, is one of the owner's sons and works at the shop.

Ian originally created his campaign for use on D20, but soon decided to use the material in-shop when interest for a regular gaming group arose. I had literally wandered into the shop one day, and after talking to Ian, decided to check out a couple of YouTube videos he had posted. Liking what I saw, I returned to see about participating in the campaign.


The Lands of Alaire are Copyright, Ian Rollins of Freakopolis Geekery

Here is a list of all current episodes of the Live Play stream of The Lands of Alaire on YouTube, up to episode 14.

The first episodes 1-4 are the Introduction to the Lore of Alaire, giving background information on the lands and people's of the campaign.

Season One consists of 14 episodes, some of which are broken into two-parts due to length and uploading issues between Twitch and YouTube
.
Season Two is scheduled to return in February of 2019.


Posted by Gerald Williams at 1:03 PM No comments:

Where Have We Been For The Last 4 Months?

The month of May was the start of several contiguous work weeks of 12 hour days, seven days a week It was exhausting. We then went into summer time shorthanded at work, so we were loaded with overtime. Needless to say, all work and no play makes a blogger want to jump off a bridge, let alone sit down and try to write something when free time is at a premium.

Nevertheless, we're back and working on new material.

- Redcap
Posted by Gerald Williams at 9:26 AM No comments:

Optional Rules: Alcohol and Intoxicants I

Many game systems tend to studiously avoid the subjects of alcohol and other intoxicants in their rules. It's easy to understand why, as they do not wish to be seen to condone the use of such substances. However, as adults, we realize that there will come those times when we may need to adjudicate the effects of a night of drinking and carousing, or similar circumstances. And I have yet to ever meet a Game Master that hasn't had to rule on a drinking match between a player character and an NPC, at least once.

The following rules are not meant to reflect real life. They are not scientifically measured and meant to portray the actual effects of various substances on the human body. They are a simple metric for game purposes only. Nor is this blog article meant to be seen as condoning or encouraging the abuse of alcohol or intoxicating substance in the real world.

Intoxication Table I is a simple table that does not require the use of calculations , or record keeping during the game. A player simply states the level at which they which their character to reach and maintain. This avoids arguments, number crunching, and other problems during play. However, the DM is the final arbiter of the game and may apply a higher level of intoxication to a character if the role-playing actions of the player, or circumstances unknown to the player, should apply to the situation.


Hit Points - The number of temporary hit points added to the character due to higher pain thresholds. These hit points are lost first when damage is taken, and can not be "healed" back through any means because they are not actual hit points.

Saves - Temporary benefit to die rolls when making Saving Throws. This is a reflection of how drunkards seemingly survive situations that harm most everyone else.

Mental - Temporary decrease in Intelligence and Wisdom scores, due to impaired judgement and mental faculties. Conversely, this adjustment is reversed and added to the Charisma of the opposite/preferred sex, thus making them seemingly more attractive than they actually are.

Memory - Recollection of events while the character was inebriated.

Liquid Courage - Self explanatory. Some people need to drink to develop the courage to do something they would not normally attempt.
Posted by Gerald Williams at 6:34 PM No comments: