Rock, Paper, Scissors (R-P-S), has been around for centuries, possibly as far back as 200 BC. Every country, on every continent, has its own variation, but it's still basically the same game with the same rules. In a pinch, whether because you don't have dice or are playing in a car, R-P-S can be a fun and convenient way of deciding a gaming outcome. Yes, I'm aware that there are dice rolling apps for your phone, but you can't use your phone while driving, and sometimes you're trying to save those last precious few % of your dying battery. 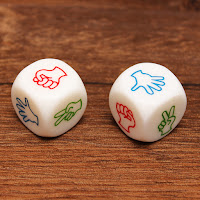 Basic Rules - As If You Didn't Already Know.

One player counts out loud.. 1.. 2.. 3! and both players then "throw" out their chosen hand gesture.

However, just as you can use R-P-S instead of dice, now you can use dice to substitute for hand gestures. Several manufacturers make Rock-Paper-Scissor dice, from d3, d6, to d12. 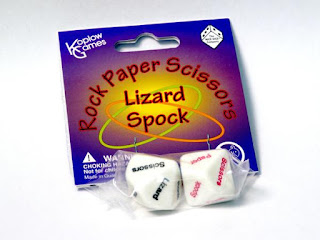 They also make d10 dice for the Rock-Paper-Scissor-Lizard-Spock variation of the game. 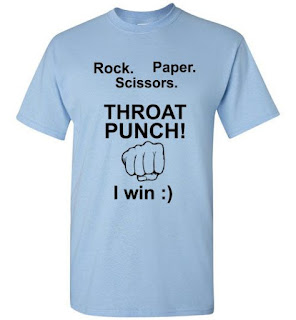 And, of course, you've always got this guy.

Posted by Gerald Williams at 7:08 PM