Going to the Birds

Duke Edwin Charlton was reknowned for his aviary. It was even said that ever since the Duke could walk that he longed to fly and be amonst the birds. They were a passion of his. A passion that young Nevan shared. The young servant loved to feed the small birds of paradise and the song birds that the Duke kept. But his favorites were the birds of prey that the Duke kept in the Mews. These were the ones that the Duke and his household would use to go hunting. Nevan loved to watch them spread their wings and glide high into the sky, circling and circling as they hunted. The Duke had many birds of prey. There were even some that Nevan could take hunting by himself, as long as he was catching something for the Dukes household to eat.

He quietly walked amongst the falcons and the hawks, admiring the sharp talons as they sat on their perch, until he came upon the Duke's most prized falcon. It was much larger than the other Falcons and had snowy white feathers. Nevan knew that its plumage made him even more valuable. A pure white bird was the ultimate status symbol. It represented wealth and power. He dreamed of the day that he might be able to hunt with such a bird. With a heavy sigh, he walked over to a smaller hawk. While it wasn't as big, he could still see the powerful wings and sharp talons. He slid the leather glove on his hand and coaxed the bird on to it. The kestrel flapped its wings a few times as it got it balance. He felt the power from the wings and knew that this was still a fierce hunter.

"Come on, you. Lets go find some dinner for His Lordship." He said, as he opened the door and left for the open fields. 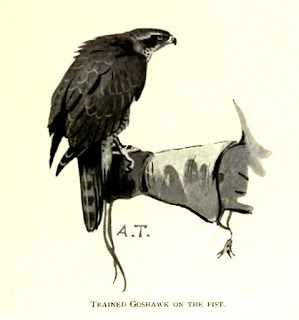 Falconry has been around for millennia, in all portions of the globe. It's been in Europe, the deserts, even on the islands of Japan. Until the invention of gunpowder, it was considered the sport of the upper class. So lets take a closer look into Falconry and how it can be applied to your campaigns.

The dictionary defines Falconry as, "The art of training hawks to hunt in cooperation with a person". Not much is known about where the art of Falconry started, but we do know that some of the earliest accounts come from Mesopotamia in roughly 2000 BC. From there we can only guess about how the sport was introduced to the rest of the world, but it spread all over the continents. It's a versatile sport that can fit just about any campaign setting.

While falconry was popular everywhere it went, it was also prohibitively expensive. The birds required special housing, food, and training gear, as well as an experienced trainer. It was because of the costs that Falconry was restricted to the nobility, and their servants, although some priests were allowed to keep falcons to help put food on the table at the monastery. The type of falcon an individual was allowed to use was determined by their social rank. Servants were allowed the smaller hawks, while a king could go hunting with a very large eagle. For creativity sake, you could probably include some mythological birds as well.

There were many birds that could be used for falconry, although not all of them were very practical. Restrictions of which falcons and hawks you could use based on your class. It was considered a crime to keep a bird that was outside your station. The lower classes were allowed kestrels and goshawks, while the upper class and royalty were gyr falcons, merlins, and even birds as big as vultures. The Book of St. Albans, written in 1486, gives a breakdown of what birds could be used and by what social class. 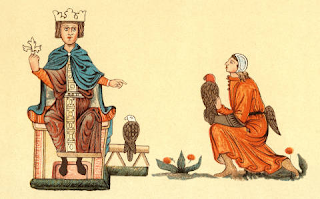 It should probably be noted that not all types of vultures hunt, so they can't really be used for falconry. The Falcon Gentle, and the Falcon of the loch, are most likely different versions of the Peregrine Falcon. There is some debate about the Bustard. Some think that it might be a Buzzard, which isn't really a bird of prey. Others think that it might be a bird that can't be identified, something of an unknown lineage. The Sacre, or Sakers, were imported from abroad and were unlikely for a knight to have, unless they were wealthy, or had traveled afar.

Most hawks were trained when they were young or from the time they were hatched. It was essential to have a good trainer. They were responsible for teaching it to fly to a persons hand, getting it used to being around humans, and for hunting prey. The birds require constant attention or they become wild and unreliable, so a trainers work is never done. The common tools they used for training were the hood, jesses, bells, and lures. Jesses are the leather straps that go around the ankles and bells were often attached at the ankles so that a falconer could listen and keep track of the falcon.

As the sport grew, a good Falcon became worth it's weight in gold. If the bird was pure white it was worth even more. There are cases in history where falcons were used to pay ransoms or given as diplomatic gifts to improve relations. They were so valuable that laws were put in place to discourage people from harming the birds. Destroying falcon eggs or harming a bird could result in imprisonment. Killing or stealing a bird could result in death. A good falcon was a status symbol and something to be protected. Nobles often traveled with their falcons in order to show them off at grand hunting parties.

All in all, falconry is a pretty easy sport to work in to any campaign setting. The sport died off for a while with the proliferation of firearms, but it's been revived on just about every continent lately. Most people think of it as a sport that is just limited to medieval campaigns, but it can be set to any location. You don't even have to limit yourself to local birds. Falcons and Hawks were often imported, exported, and gifted. You can even introduce fictional ones. Be as creative as you wish. It's sure to add some extra authenticity to any campaign. 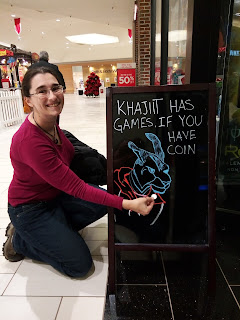 Today's article is by our special guest contributor, Rachel Williams. Rachel is a manager at a popular national food franchise, and long-time gamer in both video and table-top media. She is an avid history buff and can often be found glued to the PBS channel and streaming documentaries.. usually far later into the night than she should.

She lives in Upstate New York, with her adorable cat and equally adorable husband (the Editior).
Posted by Gerald Williams at 4:32 PM