The fighting combination of weapon and fire has been around since prehistoric times. Fire being the only form of light available to early mankind, it only makes sense that it would be used in conjunction with some means of attack during nighttime conditions. However, self defense against predators isn't the only time the combination has been of use. Not only can torches and lanterns provide light for an attacker to see by, they also provide a means to temporarily blind one's opponents. This is a fact often unrealized or ignored in game rules. 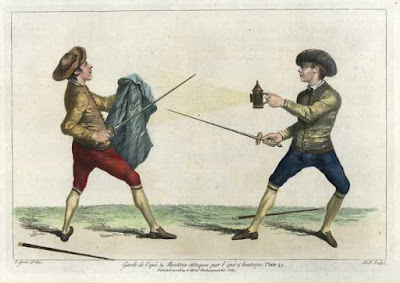 Some undead and other creatures are not effected by normal weapons, but are not immune to fire damage. Not every campaign is the same, so do not make assumptions. Always consult with your DM first.

Torches do 1d4 fire damage. While they may be used as a club, they are not as weighty as a proper cudgel. Each time a torch is used to beat something, it has a 1 in 6 chance of accidentally going out. If dropped, a torch will go out in 3-6 (1d4+2) rounds.

Lanterns are neither heavy, nor hardy, so using them as a bludgeon isn't an option. Yes, they may be used to strike a target, but usually only once, doing 1d4 damage. Intentionally breaking a  lighted lantern upon a target will do 1d4 fire damage, and 1 more point of damage per round for the next 2 rounds, and will also destroy the lantern.

Lanterns and torches may be used in combat to defend against small light weight melee (hand-to-hand) weapons. When used as such, improve the defender's armor class by one better. When used for defense, a lantern or torch can not be used to temporarily blind opponents, or as a bashing weapon.

Care must be taken, for if used in hand-to-hand combat, a lantern can be targeted by an opponent. On a successful attack against leather (plus any dexterity modifiers), a lantern can be broken, causing flaming oil to splash on the carrier (see above).

When in darkness conditions, lanterns and torches may be used to temporarily blind opponents in hand-to-hand combat. The attacker must call out their intention before making the attempt. Making the attempt does not count against the number of attacks the attacker may make that round, but does disallow the light source from being used offensively or defensively, that round. An opponent must make a Save, or suffer -1 on all to-hit rolls that round. Defenders actively using shields or cloaks to help block the light need not make Saves.

"Dark Lanthorns" (dark lanterns), or bullseye lanterns, carried by armed individuals with weapon in hand, is considered a crime in most cities, and brings stiff penalties. Thieves and ne'er-do-wells, use covered lanterns to carry out their crimes in secret, or to blind good people when setting upon them with nefarious intent.
Posted by Gerald Williams at 1:38 PM